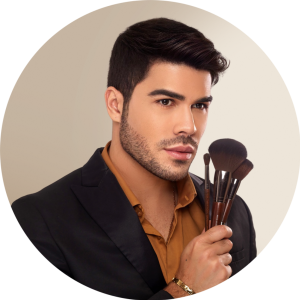 Why is bridal makeup more expensive?

Do you wonder why bridal makeup is more expensive than traditional makeup and never found a really convincing answer? Find out in this article once and for all. Check it out!

Much is speculated because bridal makeup is more expensive than social makeup. But what really defines this price difference if both are social makeups?

Firstly, social makeup doesn’t have a super charge on the question of durability, resistance to tears, photogeny, etc.

But what about bridal makeup, what’s special about it?

Before talking about bridal makeup, let’s think about the wedding occasion right?

A very important and remarkable event in the life of anyone, especially a bride, who dreams, plans, creates expectations, idealizes, in short.

So it’s not just the makeup itself, it’s a continuity, a complement, a key piece in the whole process of being a perfect bride according to the bride’s individual style and dream.

So the makeup becomes much more expected, awaited and there’s a much greater expectation over this proposal that will be carried out.

Not only from the bride, but from everyone who will be there at the event, from the groom, family, guests, photo and video team, in short.

So it’s about the meaning that this makeup represents in the moment of the bride’s life, and so that it corresponds so much to this great expectation, there is a connection with the concept of the celebration, dress, hair, accessories, color palette, and all the other details, a lot of planning and sensitivity of the hired makeup artist is necessary.

In addition to this emotional and behavioral part involved, I would like to highlight a few more key points that also respond “because bridal makeup is more expensive” .

Why is bridal makeup more expensive after all?

Unlike traditional makeup that is decided there in a few minutes, with the client already seated in the chair, bridal makeup requires prior planning, a long conversation and research by this makeup artist to deeply understand the whole context of the wedding, the personal style of the bride. Her expectations, an analysis of her face, skin type, hairstyle and what image this bride wants to show.

Average time: 04h if it is just a meeting + pre-wedding advice via whatsapp, email, exchange of messages and all the necessary attention so that the bride feels calm and confident about her beauty.

Once the initial interview with the bride or the couple is done, then the test takes place, which is where the makeup artist offers options for looks, based on all the conversation previously done. Tests the color of the base, applies contours, checks the intensity and tones used, the color of the lipstick, the intensity of the highlighter, the makeup style, among many other details, so that the bride can see herself with the makeup she will use on her wedding day. Being able to remove and redo this makeup from 2 to 4x.

This may be a new concept for some people, but in my career I have always done the “photogenic makeup test” which is to photograph the makeup in different lighting to see how the makeup reacts.

What does this test consist of?

● Shooting with flash and without flash

● Photograph the makeup at various angles

● Shooting from near and far

The purpose of the test is to check if the makeup will be marked or with a grayish/ whitish effect in some lighting or angle.

Unlike social makeup that can be done in 30, 40 or 60 minutes, bridal makeup usually requires more time in its preparation to ensure a more refined finish will already be under the focus of many lenses for both photographers and videographers.

In addition, during the make-up, the making-off is still done, which requires a certain amount of performance from the makeup artist to generate good scenes and good clicks for the bride’s album.

Not that bridal makeup needs to be done with all products totally different from traditional makeup.

However, there are some specific and much more expensive products that need to be used for the preparation of bridal makeup in order to make it more resistant, long lasting and with the necessary photogenic finish for the occasion, which makes this makeup even more expensive.

The makeup artist also goes through a great deal of psychological pressure before and during the rendering of the service, which is not common most of the time, since given the seriousness of the occasion and expectation of the bride, often her emotional sensitivity, the makeup professional also embarks in all this wave of anxiety and ends his shift with great mental exhaustion, due to the great dedication of time and energy.

Because bridal makeup is more expensive, it will not be answered by looking at it from the mere perspective of comparing techniques, but rather from the whole context involved mainly in the pre-realization of makeup, advice, consultancy and during the provision of this service.

The makeup artist is not a mere reproducer of techniques. He is a creative artist and a human being who gets involved in the bride’s dream, and lives it together with her and needs to be prepared both technically and emotionally to live up to her expectations.

PrevPREVIOUSSkin Care For Beginners: Learn How To Take Care Of The Skin Without Mysteries
NEXTBlack skin makeup: 7 things you might be doing wrongNext

Makeup artist: How to do makeup faster on clients

Do you want to know how to speed up your make-up on your customers and triple your turnover? Check out our article.

Makeup Artist: How to Attract Makeup Clients with Instagram

Want to learn how to use Instagram to attract more customers to your makeup schedule? Check out this article.

Mentoring for makeup artists: Why you should do it now

Understand how mentoring for makeup artists can help you achieve your goals faster in professional makeup.

Black skin makeup: 7 things you might be doing wrong

Maybe you've seen some content on the internet teaching you how to do makeup on black skin, but what about the main mistakes? Find out in this post what they are, how to avoid them and rock the makeup in black skin.

Skin Care For Beginners: Learn How To Take Care Of The Skin Without Mysteries

Do you want to achieve a more beautiful, youthful and luminous skin? Find out in this article how to make skin care uncomplicated and easy to include in your routine.

If you have any questions, requests or suggestions, send your message using the form below.